Here is what happened and global reactions to the incident. 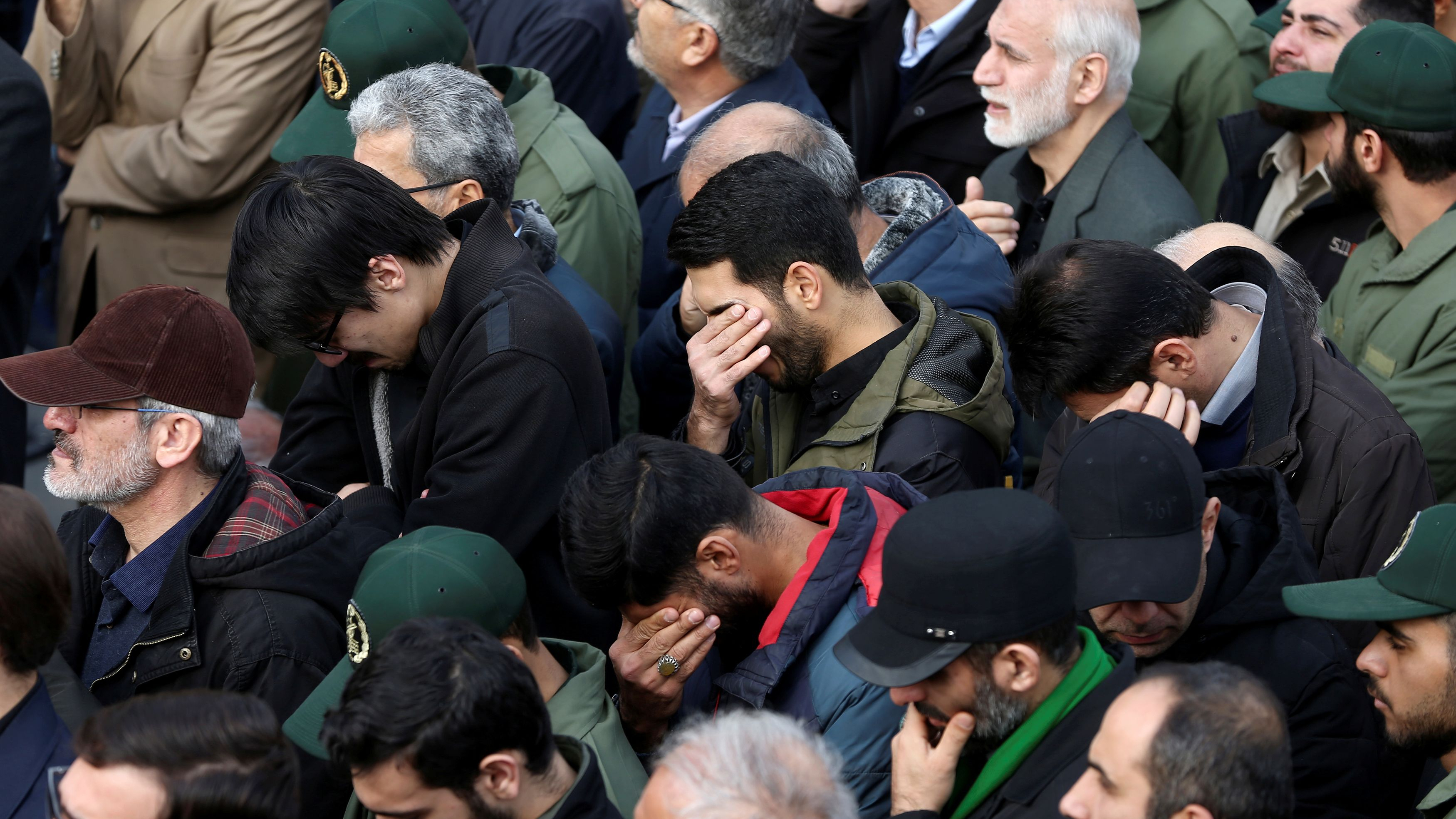 Thousands of mourners chanting "America is the Great Satan" marched through Baghdad ahead of the funeral procession for Iranian Major General Qassem Soleimani, who was killed in an airstrike in Iraq, ordered by Donald Trump on January 3, 2020. The tensions between Iran and the U.S. tend to worsen. 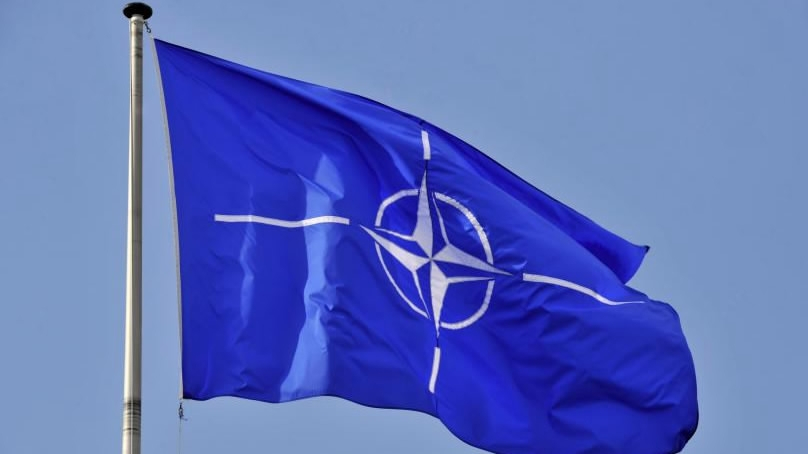 NATO has suspended its training missions in Iraq following the U.S. killing of Iranian military commander Qasem Soleimani, AFP reported on Saturday citing a spokesperson for the alliance.

The spokesperson explained that even with the training activities suspended, NATO's mission "is continuing." 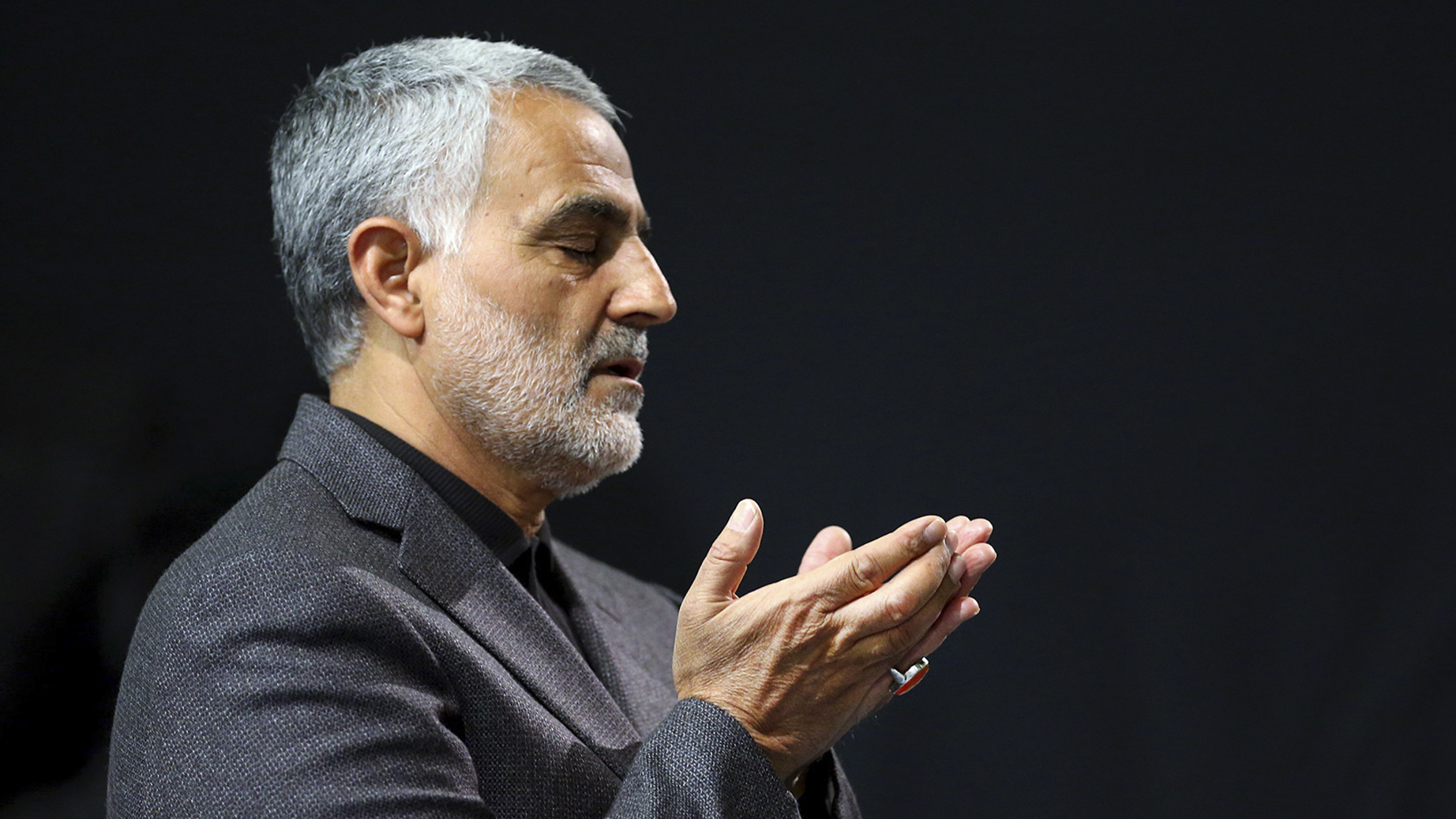 Major General Qasem Soleimani, commander of Iran's Quds forces, was thought to have controlled Iran's foreign policy in much of the Middle East. /AP Photo

Major General Qasem Soleimani, commander of Iran's Quds forces, was thought to have controlled Iran's foreign policy in much of the Middle East. /AP Photo

The killing of Iran's top general, Qasem Soleimani, has led to a rapid escalation of tensions between the U.S. and Iran. We are likely to see confrontations between the two harden and attacks increase, especially in the Gulf region, says expert. 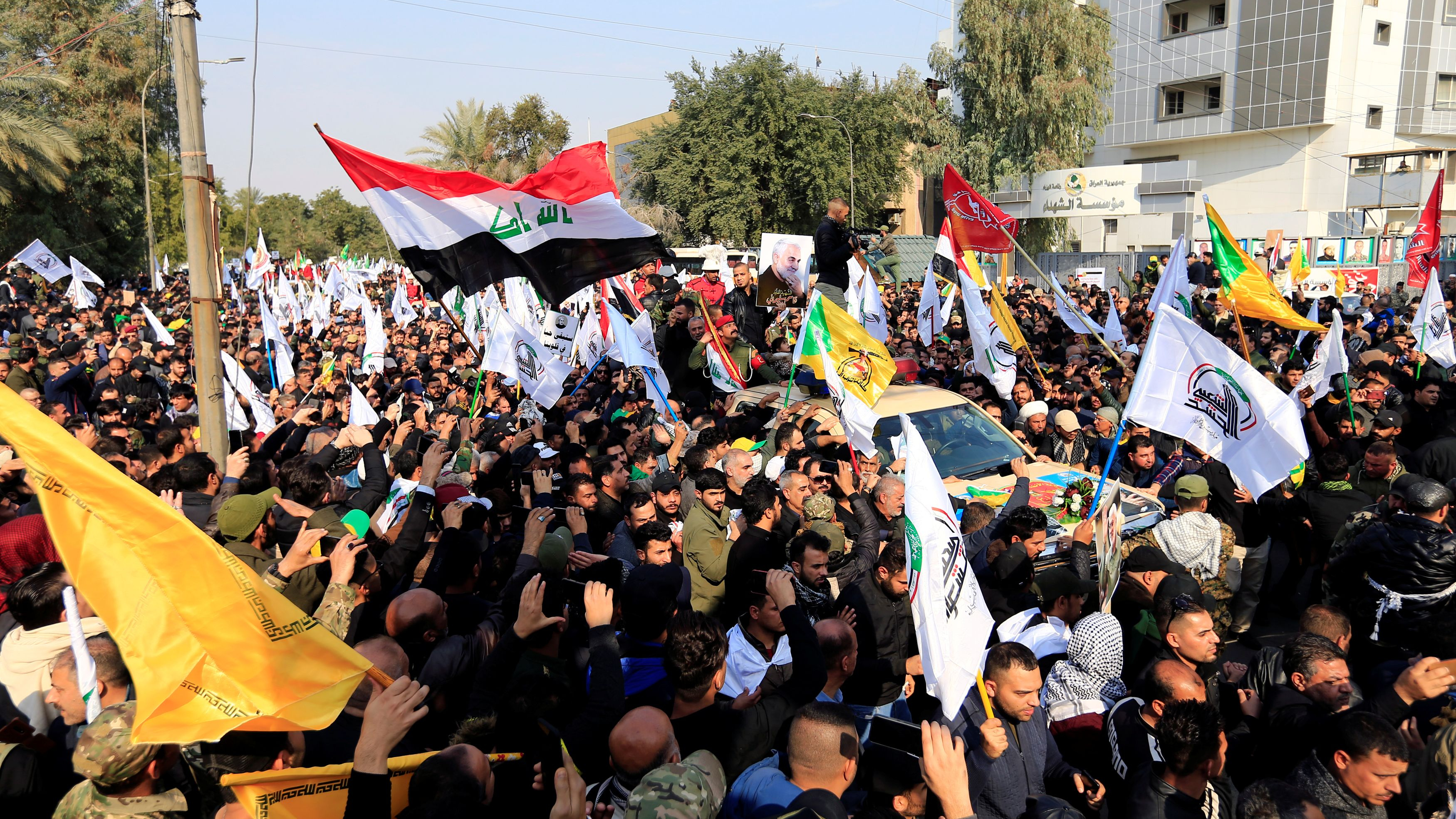 Mourners chant 'America is the Great Satan' at Soleimani funeral

"Washington will suffer the consequences of such a criminal measure not only today but also in the years to come", Iranian news outlet, Tasnim quoted Iranian President Hassan Rouhani as saying at meeting on the same day.

China is urging the U.S. not to abuse force, but instead seek solutions through dialogue. Chinese State Councilor and Foreign Minister Wang Yi made the remark in a phone call with Iranian Foreign Minister Mohammad Javad Zarif on Saturday.

"The dangerous U.S. military operation violates the basic norms of international relations and will aggravate regional tensions and turbulence," Wang said, referring to the killing of top Iranian commander Qasem Soleimani in Iraq on Friday.

"China opposes the use of force in international relations. There is no way out for military means, nor for extreme pressure," Wang said.

Zarif briefed Wang on Iran's stance on the attack that killed Soleimani and said he hopes that China can play an important role in preventing the escalation of regional tensions.

Wang said China will uphold an objective and fair position and play a constructive role in maintaining peace and security in the Middle East Gulf region.

Le Drian stressed that France is opposed to the use of force in international relations and believes that Iraq's territorial sovereignty should be respected.

He said under the current circumstances, it is important to maintain the Iran nuclear deal, adding that France hopes to communicate closely with China and play an active role in preventing tensions in the region.

Wang said both China and France are permanent members of the UN Security Council and shoulder important responsibilities in maintaining world peace and stability.

Both parties must strengthen strategic communication, play a constructive role, jointly safeguard the purposes and principles of the UN Charter and the basic norms of international relations, and jointly oppose any unilateral acts of using force, Wang said.

Qasem Soleimani to be laid to rest in Iran

The body of Iranian commander, General Qasem Soleimani, will be transferred to Iran after the funeral processions in Iraq, Iranian state media reports.

On Saturday, thousands of mourners have gathered for a funeral procession through Baghdad to pay their respects to Qasem Soleimani and Iraqi militia commander Abu Mahdi al-Muhandis, killed in a U.S. airstrike. 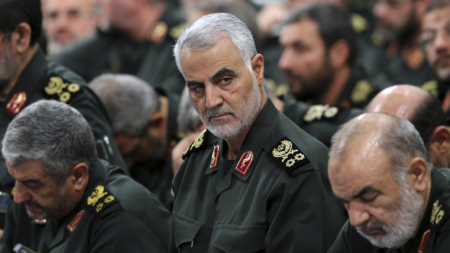 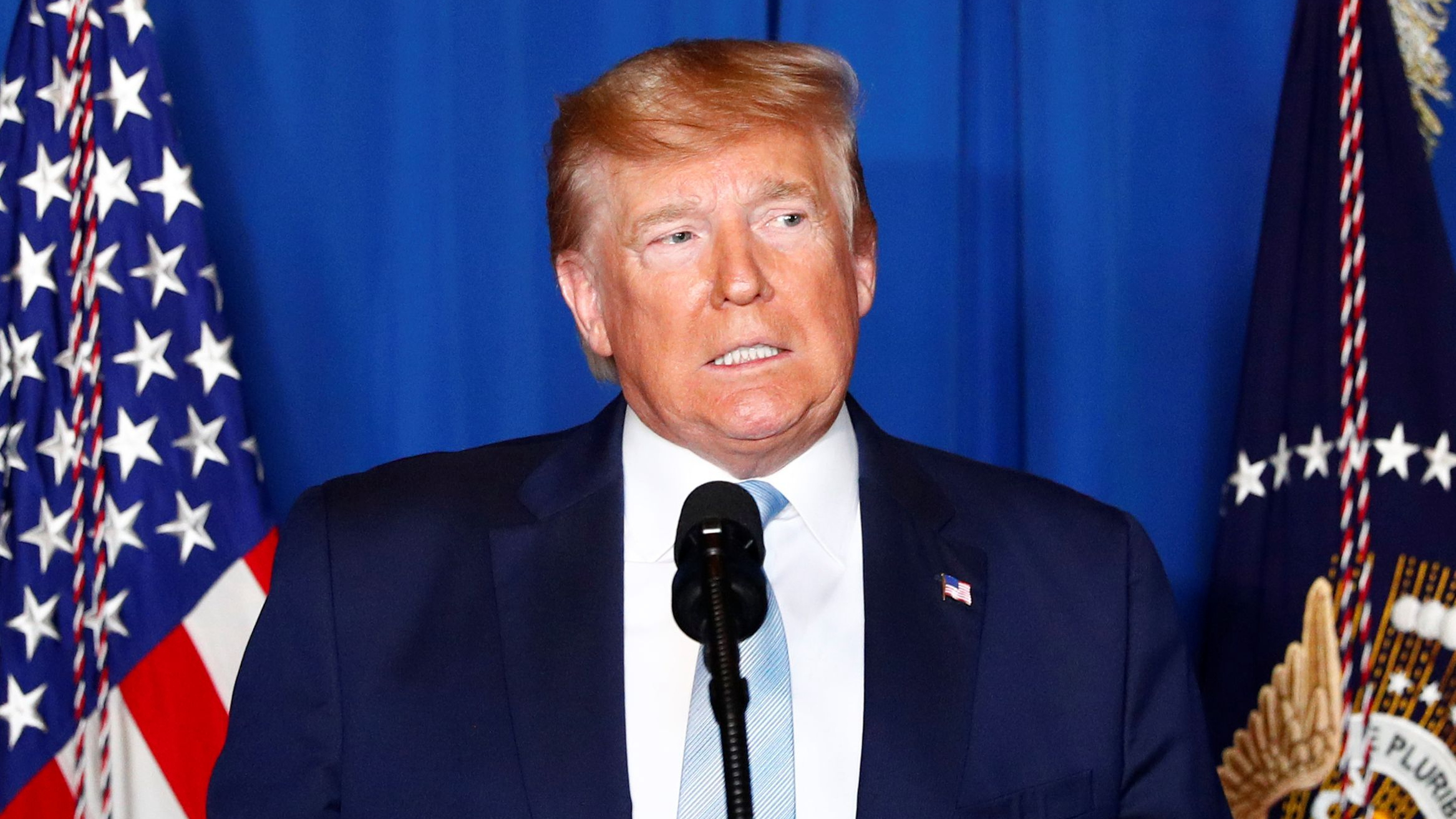 Trump, who has repeatedly claimed to be pulling U.S. troops out of conflict zones, on Friday sent more soldiers to the Middle East.

A Pentagon official said 3,000 to 3,500 troops from the 82nd Airborne Division's Global Response Force, which had already had sent hundreds of reinforcements earlier this week after protests at the U.S. embassy in Baghdad, will go to Kuwait.

Some 14,000 other troops have already been deployed as reinforcements to the Middle East this year, and the U.S. already had around 60,000 military personnel in the region.

NYC on alert after Soleimani's killing

In New York City, Mayor Bill de Blasio announced on Friday he was consulting with city officials about police steps to protect key locations “from any attempt by Iran or its terrorist allies to retaliate against America,” after the U.S. killing of top Iranian commander Qaseem Soleimani.

"We will have to be vigilant against this threat for a long time to come," said the mayor.

"No one has to be reminded that New York City is the number one terror target in the United States," De Blasio tweeted, "We're taking escalation in the Middle East seriously."

Iran told the United Nations Security Council and Secretary-General Antonio Guterres on Friday that it reserves its right to self-defense under international law after the United States killed top Iranian commander Qasem Soleimani.

Iranian UN Ambassador Majid Takht Ravanchi wrote in a letter that the killing of Soleimani "by any measure, is an obvious example of State terrorism and, as a criminal act, constitutes a gross violation of the fundamental principles of international law, including, in particular, those stipulated in the Charter of the United Nations."

Differences should be resolved through dialogue and consultation, Yang Jiechi, a member of the Political Bureau of the Communist Party of China (CPC) Central Committee, said on Friday in a phone conversation with U.S. Secretary of State Mike Pompeo.

During the talks, the U.S. side reported its position on the current situation in the Middle East.

Yang, who is also director of the Office of the Foreign Affairs Commission of the CPC Central Committee, said that China is highly concerned about the current situation in the Middle East.

China has always maintained that differences should be resolved through dialogue and consultation, Yang said, adding that China opposes the use of force in international relations.

China hopes that all parties concerned, especially the United States, will exercise restraint and get back to the track of dialogue as soon as possible to de-escalate the tensions, Yang said.

UN Secretary-General Antonio Guterres has expressed concern over the recent escalation in the Gulf region, calling for maximum restraint by leaders and stressing that "the world cannot afford another war in the Gulf."

In photos: Iranians take to the streets after Soleimani's killing

Iranians took to the streets of Tehran on Friday to protest the killing of General Qasem Soleimani, head of Iran's elite Quds Force, in a U.S. airstrike at Baghdad airport. 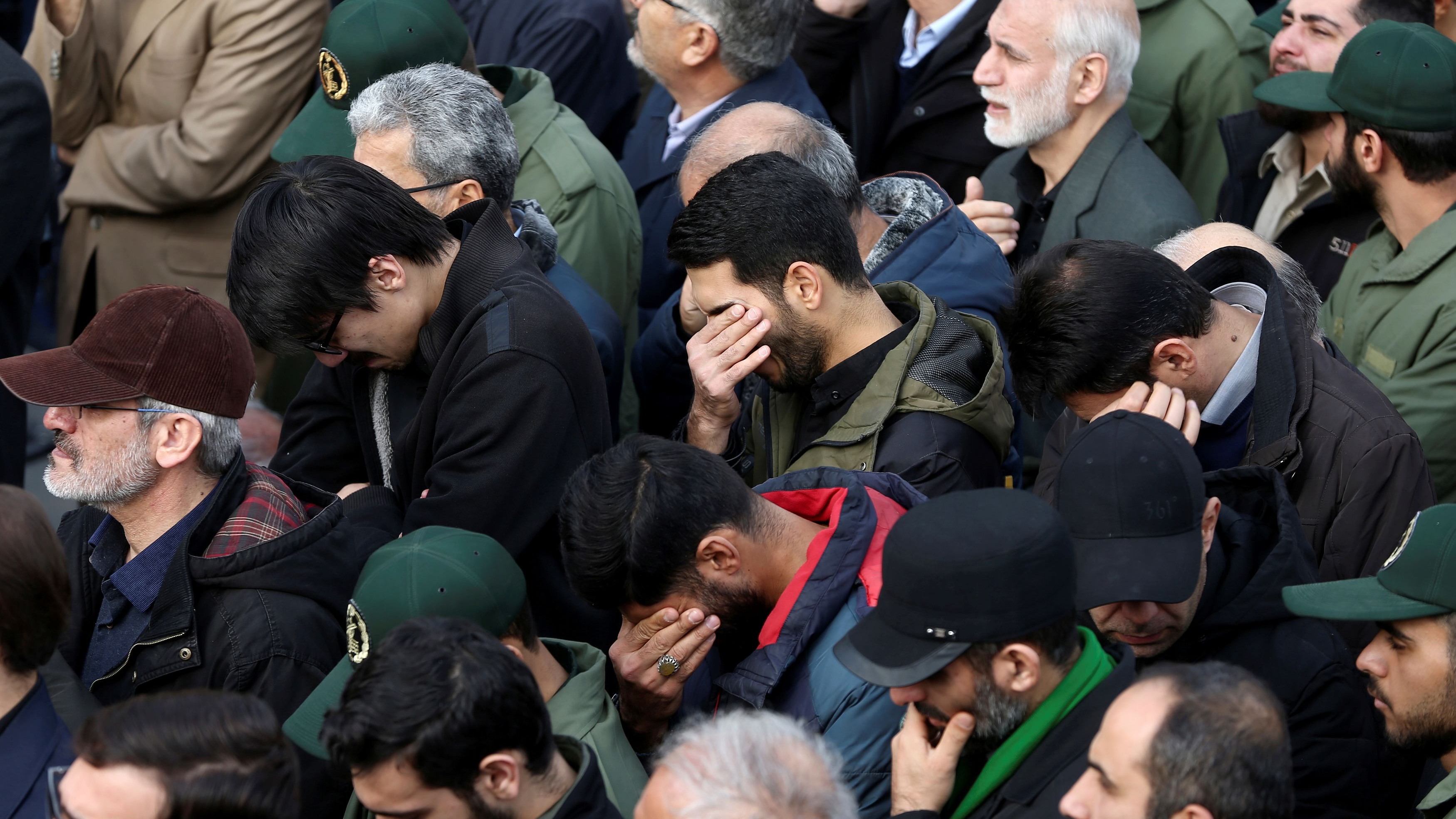 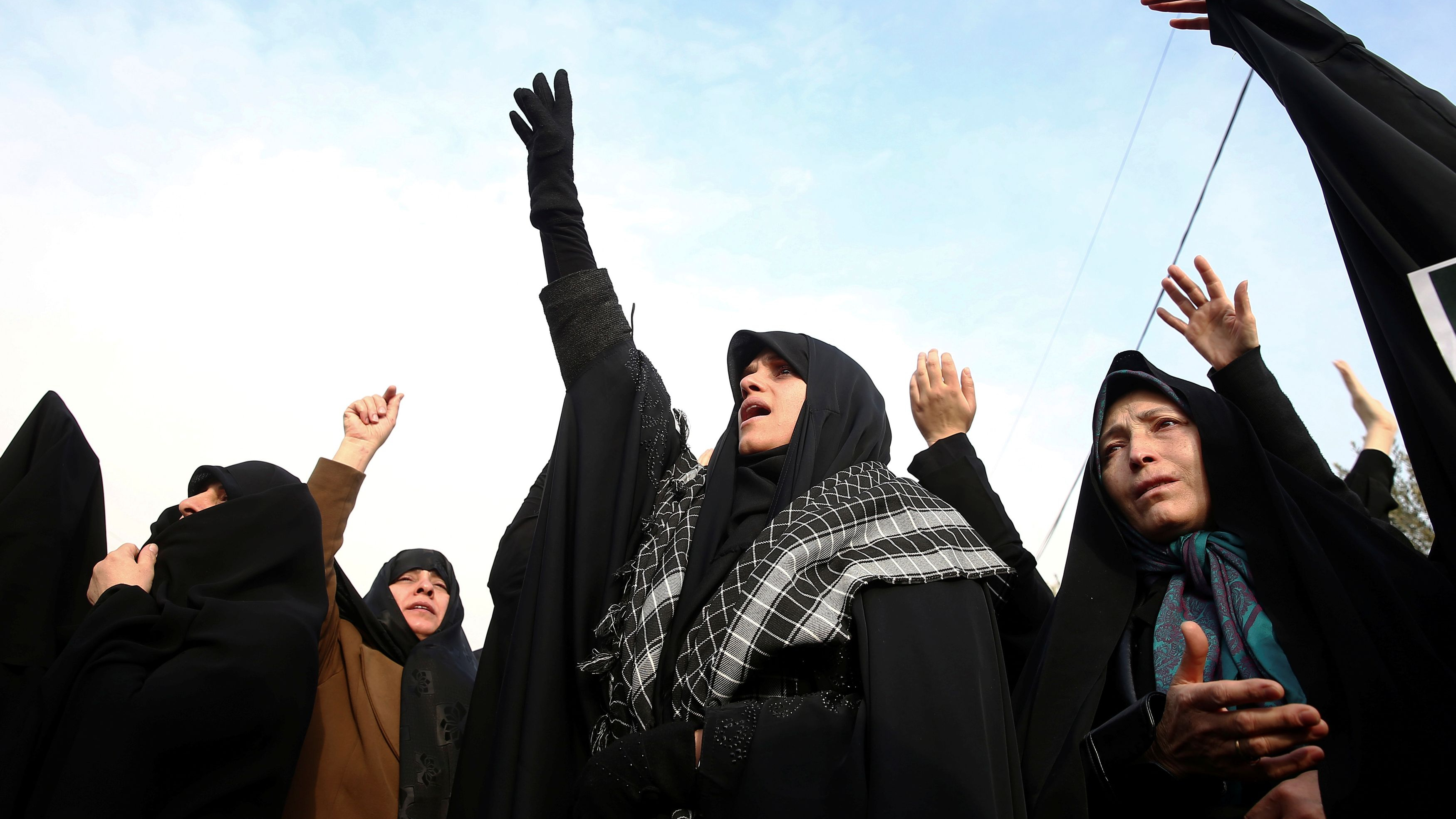 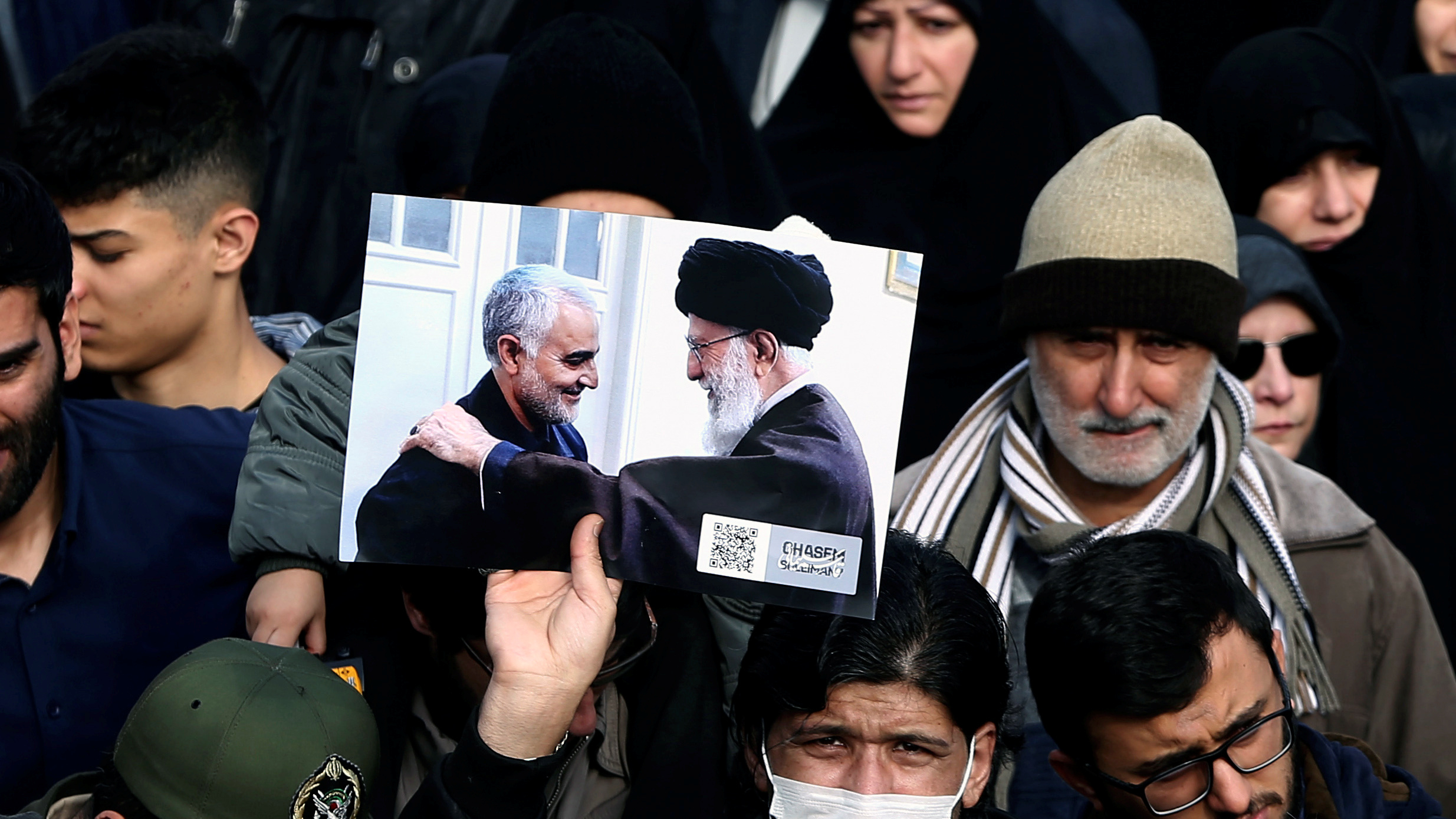 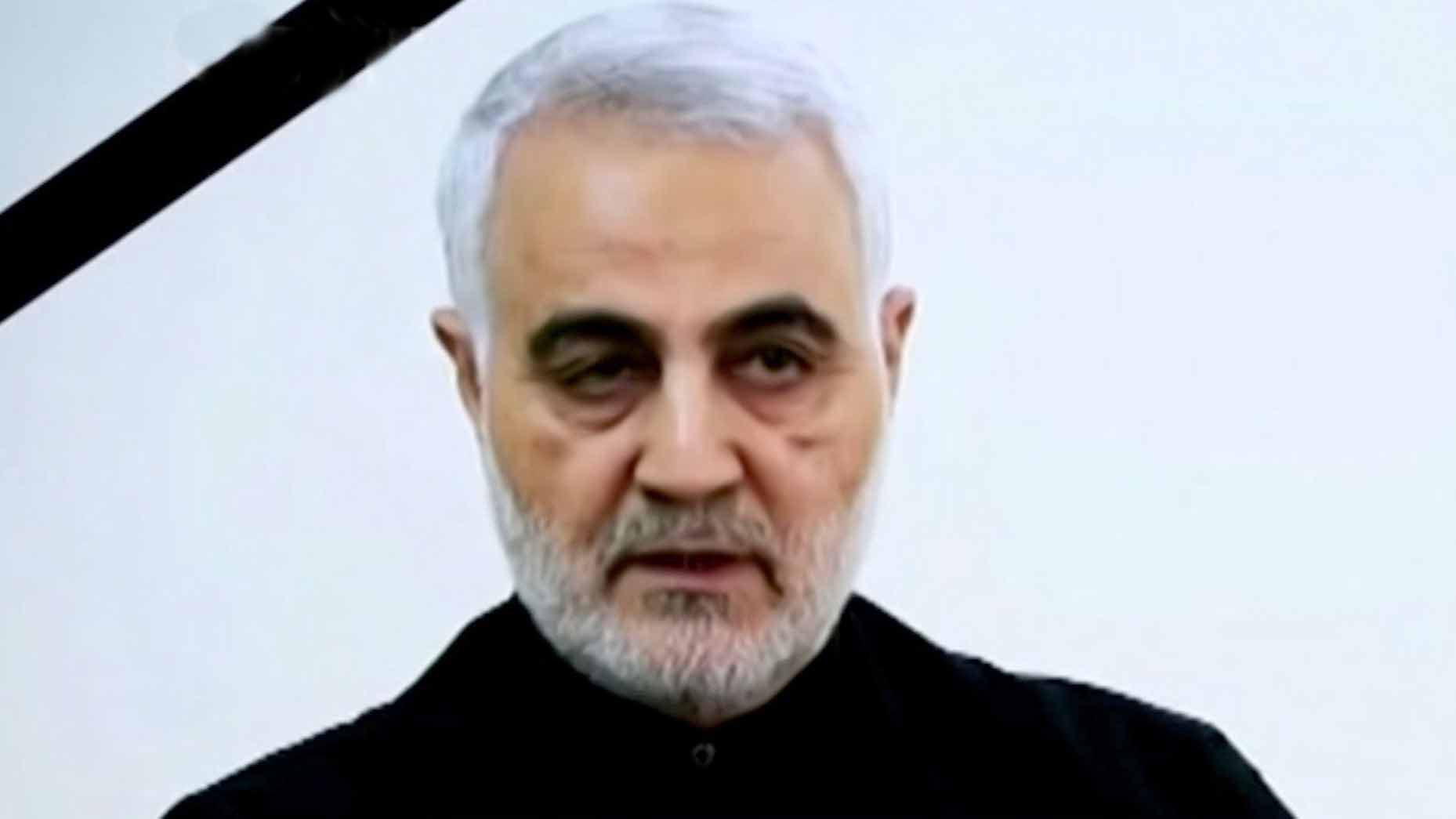 Soleimani was killed in a drone strike at Baghdad airport on Thursday. 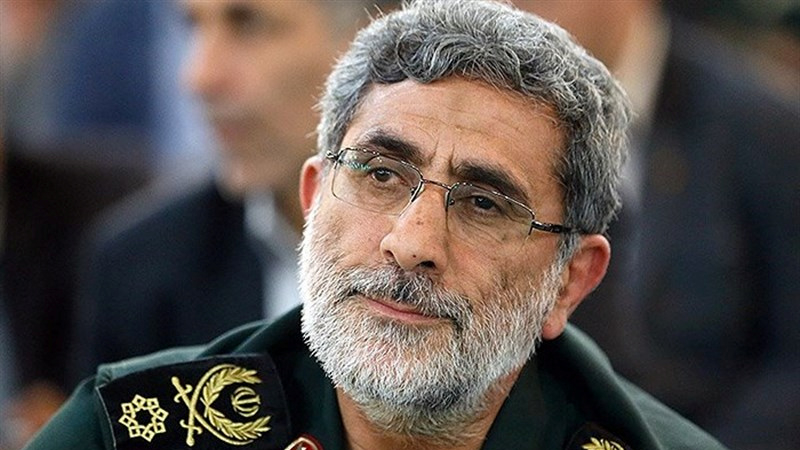 Iraqi President Barham Saleh called for restraint on Friday, characterizing the U.S. airstrike as an "aggression" and saying Iraq would be destabilized if "voices of reason" did not prevail.

Commenting on the U.S. security alert, the Iraqi oil ministry said only U.S. citizens working for foreign oil companies have left Basra at the request of their government.

The situation in oilfields across Iraq is normal and production and export are unaffected, said the ministry.

China consistently opposes the use of force in international relations, the country's foreign ministry said on Friday when asked about the U.S. killing of a top Iranian commander.

China's Foreign Ministry spokesperson Geng Shuang said the country consistently opposes the use of force in international relations, adding that peace and stability in the Middle East must be upheld.

China urges relevant sides, especially the U.S., to exercise restraint and refrain from any actions that might escalate the situation, added Geng.

"Due to heightened tensions in Iraq and the region, the U.S. Embassy urges American citizens to heed the January 2020 Travel Advisory and depart Iraq immediately," the statement said. 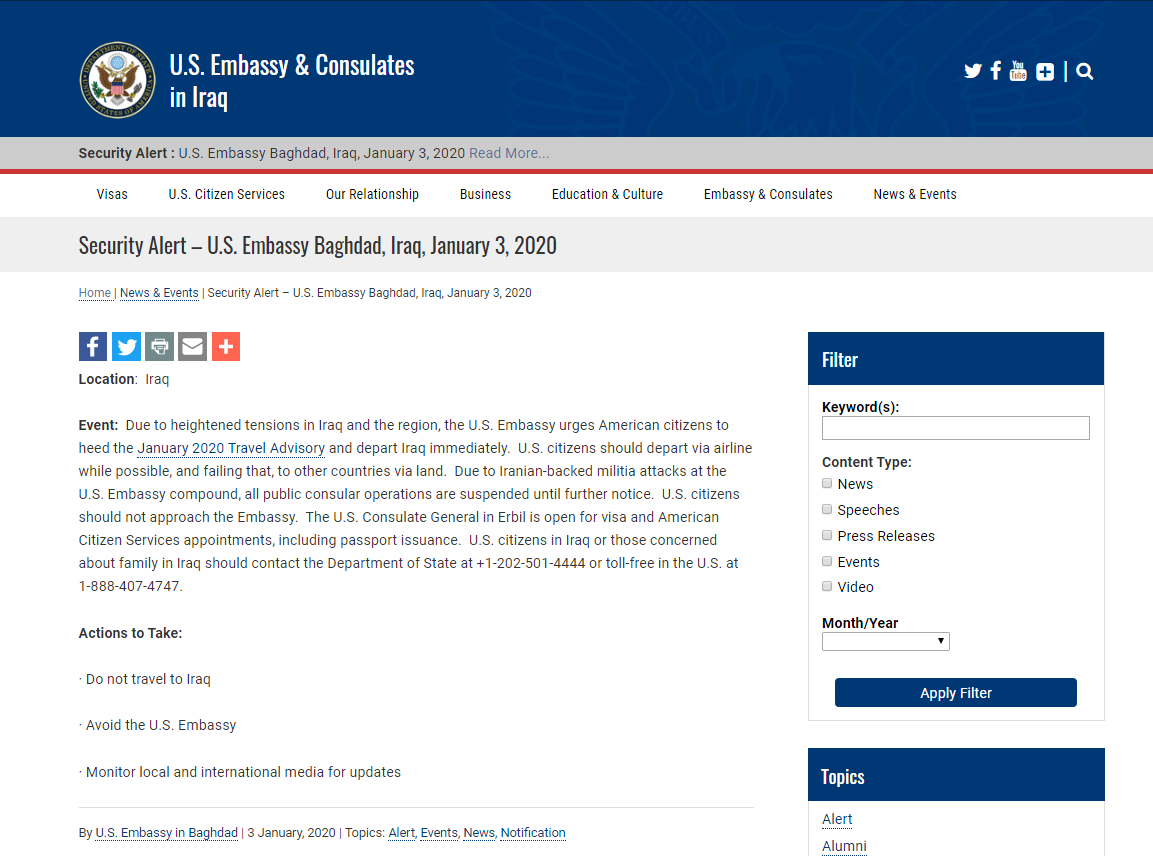 The strike was "a dangerous escalation that is the spark of a devastating war in Iraq," said the prime minister.

He added that the strike violated conditions for U.S. military presence in Iraq and called on parliament to hold an extraordinary session.

Khamenei said that the mission of Soleimani and "resistance" will not stop by his death.

All should know that "the resistance movement will continue more strongly, and a definite victory awaits those who fight in this auspicious path."

The criminals who shed the blood of General Soleimani and his companions "should await a tough revenge," he said.

The Pentagon has confirmed the airstrike, saying U.S. President Donald Trump ordered the killing of Soleimani.

"At the direction of the President, the U.S. military has taken decisive defensive action to protect U.S. personnel abroad by killing Qasem Soleimani, the head of the Islamic Revolutionary Guard Corps-Quds Force," read a statement by the Defense Department.

"This strike was aimed at deterring future Iranian attack plans. The United States will continue to take all necessary action to protect our people and our interests wherever they are around the world," the statement added. 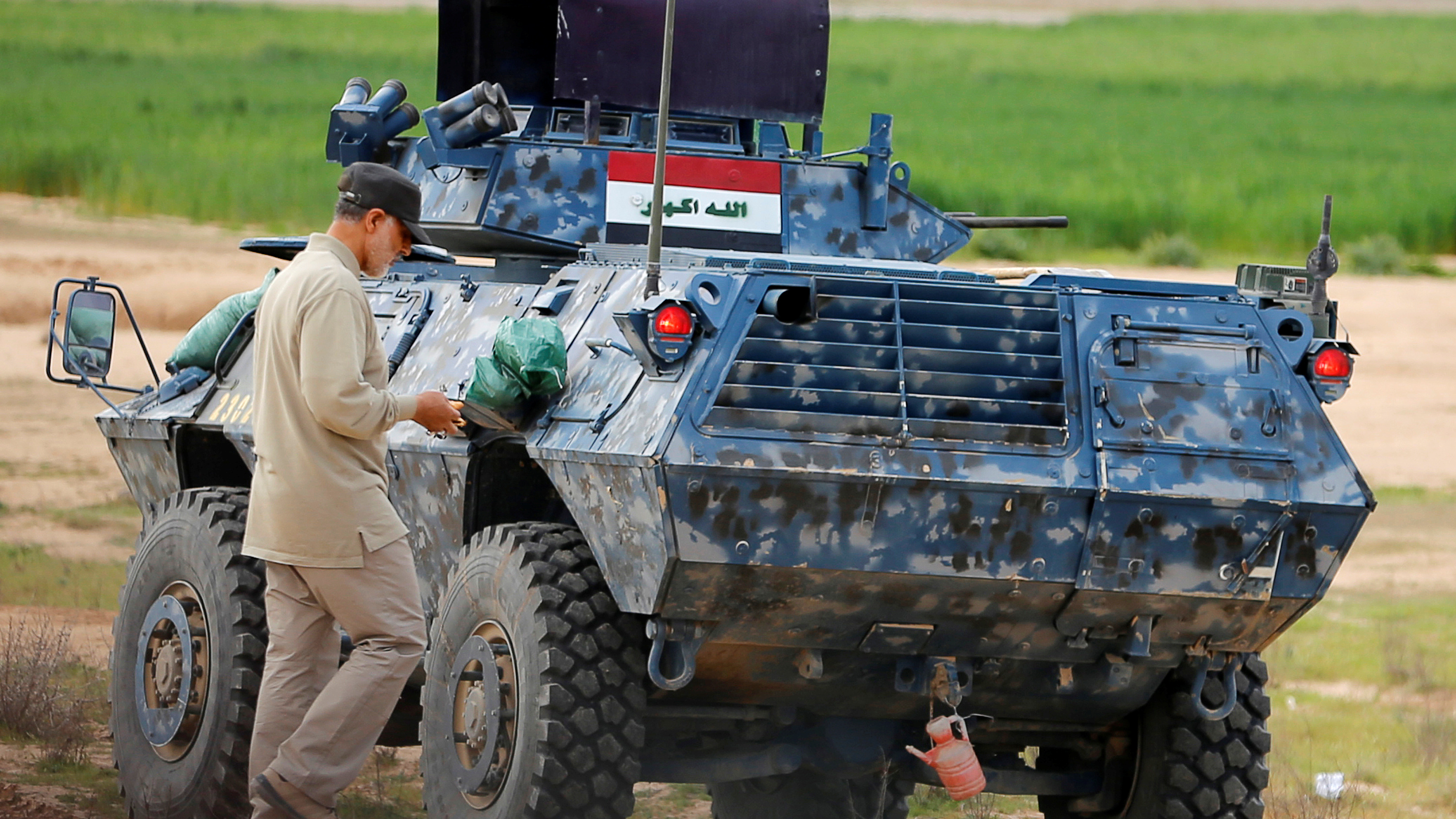 Iranian Revolutionary Guard Commander Qasem Soleimani walks near an armored vehicle at the frontline during offensive operations against ISIL in the town of Tal Ksaiba in Salahuddin province, March 8, 2015. /Reuters Photo

Iranian Revolutionary Guard Commander Qasem Soleimani walks near an armored vehicle at the frontline during offensive operations against ISIL in the town of Tal Ksaiba in Salahuddin province, March 8, 2015. /Reuters Photo

Soleimani was an Iranian major general in Iran's IRGC, and since 1998 the commander of the Quds Force, which is in charge of extraterritorial military and clandestine operations.

Al-Muhandis was one of the Iran-backed paramilitary leaders in Iraq. He was the de facto commander of the Hashd Shaabi Forces in Iraq, who headed the Iraqi Hezbollah Brigades as well.

U.S. media reports said Soleimani and representatives from Iran-backed militias were leaving the airport in two cars when they were hit by a U.S. drone strike.

The strike came days after protesters attacked the U.S. embassy in Baghdad, clashing with U.S. forces, which the Pentagon said was approved by Soleimani.